The refrigerated air dryers is the most commonly used compressed air dryer. They remove water from the air stream by cooling the air to about 3°C (38°F) and effectively condensing moisture in a controlled environment. 3°C (38°F) is a realistic lower limit for refrigeration dryers, as there is a risk of the water freezing at lower temperatures. 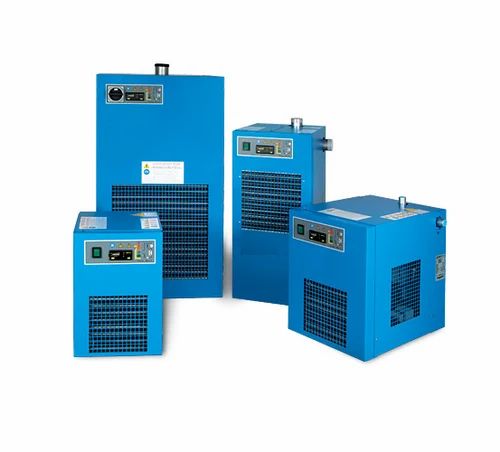 They are commonly referred to as primary dryers and typically produce air quality suitable for about 95% of all compressed air applications.

Refrigeration dryers use two heat exchangers, one for air-to-air and one for air-to-cooler. The compressors used in this type of dryer are usually airtight and the gases most commonly used are R-134a and R-410a for smaller air dryers up to 100 cfm.

Older and larger dryers still use R-22 and R-404a refrigerants. The job of the two heat exchangers is that the cold exhaust air cools the hot intake air and reduces the required compressor size.

Refrigeration dryers work on the same principle as household refrigerators or household air conditioning systems. The compressed air is cooled in an air-cooled heat exchanger to about 35°C, the temperature at which water vapor condenses and is removed.